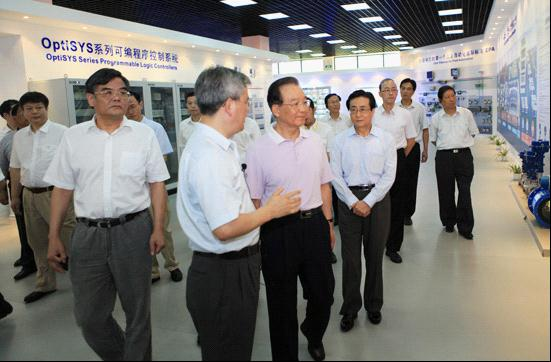 August 17, 2012 – Wen Jiabao, Premier of the State Council, with a group of leaders of the ministries paid a visit to SUPCON on August 14.

In SUPCON’s Exhibition Hall, Wen Jiabao received a brief introduction on the company development, business segments, product technology, and talented employee of SUPCON. He complimented on the stability of SUPCON’s control systems when hearing them having been running continuously on site for 10 years without a fault. He was also in favor of SUPCON’s efforts in training and educating future generation.

Later, Wen held a meeting at SUPCON with the entrepreneurs from SUPCON and a number of selected companies. In the meeting, several topics were discussed, such as production and management status, and the supports that the enterprises are seeking from the government at present.

In his visit, Wen Jiabao attached great importance to technological innovation. As a leading hi-tech company, SUPCON will persist in its concentration on R&D and the development of new technologies.